Bringing a revolution to manufacturing business models through 5G and IoT

In March 2020, provision of the "Global IoT Package," a set of services to support global deployment of IoT, began. This service package, born out of cooperation between KDDI, the Toshiba corporate group, and SORACOM, all of which operate in different types of business, is being looked at as something that could bring a revolution to the manufacturing industry. With that in mind, we had key people from 3 companies speak about what is happening now on the front lines of business, and what kind of revolution we must begin to move towards.

How should Japan's manufacturing industry approach "data utilization", the key to revolutionizing the industry? 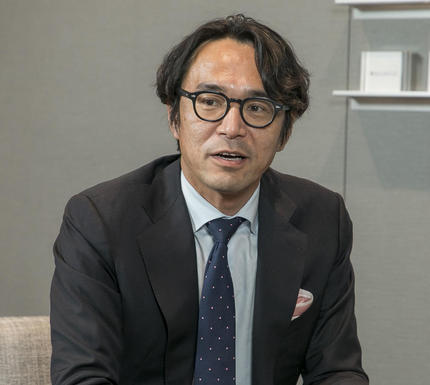 Fujii: Recently we hear many keywords related to revolutionizing business, such as "DX", "IoT" and "5G". Of course, we at KDDI are deeply involved with all of these, and I feel that it may be the manufacturing business that is facing the greatest need for such a revolution. What do you think, Mr. Shimada?

Shimada: I think that we are no longer in a time where we talk about companies by industry, like “Toshiba is a manufacturer, KDDI is a telecommunications company and SORACOM is an IT company.” For example, a smartphone may not be buildable without the NAND-type flash memory developed by Toshiba, but the company that provides that smartphone to the consumer is now getting nearly 100 times the corporate value of Toshiba. We have to think about why this has happened, and many people have probably already noticed what the answer is: data.

Fujii: My former place of employment was with Google, and Katayama’s was with AWS. Meaning, we come from GAFA, which you often hear about recently, and GAFA’s strength is also said to be that they have got a firm hold on data. 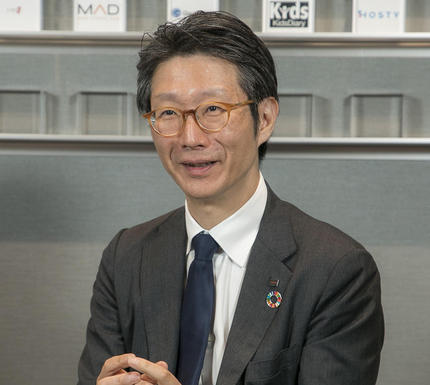 Shimada: Many in the manufacturing industry have long held pride in being able to “create anything”. I myself have been involved with both hardware engineering and software development, so I understand wanting to keep that faith alive, but it is clear that is has become very difficult to innovate anymore with that stance. Furthermore, smartphones, the devices that symbolized data utilization, have now become commonplace, and companies around the world, GAFA included, are searching feverishly for what will be the next big thing after smartphones. I believe that is the situation we see happening now.

Katayama: Yes, with people all around the world having smartphones and being connected by large volume data lines, exchanging a variety of data over the cloud in cyberspace, GAFA has raised the value of that data. But many companies are already searching out innovation through networks besides those of the Internet or other networks used with PCs and smartphones. In that search, IoT has garnered attention, and for us at SORACOM this is a big opportunity. 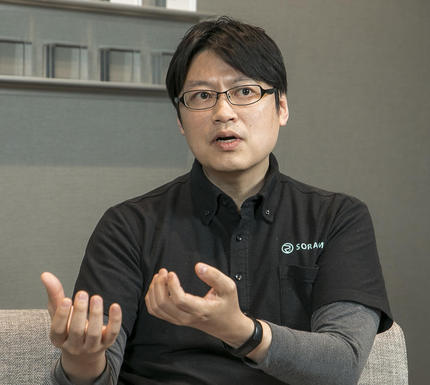 Fujii: The points both of you raise are all based on the idea of global business, and similarly, all industries are already operating within the flow of global business, and a key that will decide their future is data utilization. That is why we have to think about what Japan’s manufacturing industry must do in this global age. Awareness of this has probably taken root among many people involved in the industry – awareness that the aging population is falling, the domestic market is already matured, and that they cannot cling to just the domestic market. In wondering “But what can we do that will lead to a business revolution”, the key is data. As IoT expands to all kinds of things, if the data acquired from those devices can be put on networks through the work of engineers such as those at SORACOM, we will become able to do things in a global manner that we could not do with the networks that exist today.

Once things can send data through IoT technology,
what kinds of business will become possible?

Shimada: For people wondering “How can the manufacturing industry acquire data and how can they use it,” allow me to use our experiences at Toshiba as an example. There are in fact a countless number of users who partake of Toshiba’s services every day. For example, our point-of-sales system has the largest market share in the world and is always being used for shopping transactions, and many people also make use of Toshiba technology at such locations as train ticket gates and the elevators of office buildings. Unfortunately, we have until now not made any use of the data that can be gained from this usage, but if we can do so going forward, this huge amount of data holds the potential to produce value. To make this possibility a reality, we must use a BtoBtoC approach. If we stay in the confines of the traditional BtoB approach, I believe these new IoT projects will not succeed. The business model of making a machine, delivering it to the customer, receiving payment and being done, is reaching its limits. We need to pursue a new, BtoBtoC business model of collecting and utilizing data, creating a strong connection with consumers, and I believe that what will open up chances for this to existing manufacturing businesses are IoT and CPSs (Cyber-Physical Systems). We must lead the way to new possibilities that befit the Data 2.0 age of data acquisition, storage and utilization.

Fujii: Toshiba Data was founded on the thinking that “There are limits to cyber-to-cyber data utilization. From here on is an age of collecting and utilizing data from physical things as well through CPS,” and Mr. Shimada has become that company’s CEO.

Shimada: Toshiba Data was just created this February, but has already started a service that uses smart receipts. This service eliminates paper receipts issued at point-of-sales cash registers, instead sending digital receipts to consumers’ smartphones or other devices. By continuing with this system, it will be possible to make use of purchase behavior data in a variety of businesses. For example, the usage rate of discount coupons issued by local stores, etc. is said to be only about 5%, but when a store using smart receipts issued targeted digital coupons based on customer purchasing data, coupon usage exceeded 50%. Discussions about IoT or CPS tend to become entirely technical, but what should first be considered is “what kind of business can be done with it, and what kind of new value will it let us provide.” When talking about DX or data utilization we also tend to think about creating value out of our existing data, but it is more important to expand the coverage of information being issued by consumers in their daily lives. That is what IoT and CPS are for. Technology is just a tool.

Katayama: I agree. At SORACOM we are also promoting the simplification of connecting through IoT. When thinking of embark on this new, uncharted theme of data utilization, we always tend to imagine large-scale technological change, but actually it is possible to start on a small scale.

Fujii: We have been telling a variety of industries that, because global business is changing at a rapid pace, if they want to attempt to revolutionize themselves they should start now. With a partner like SORACOM, which provides state-of-the-art solutions, even a giant manufacturing company can start a new endeavor on a small scale. Even if it’s limited in scope, companies should start storing data, using it, and evaluating their efforts, and then use this as a springboard into large-scale innovation, and it is because we think this that the three companies we represent have hurried to make the “Global IoT Package” service a reality.

Katayama: If companies will consider us at SORACOM as a group that makes IoT-related technology easy-to-use, or democratizes it, then they should be able to leave IoT issues to us while focusing on their resources on their primary business activities. If they still think that IoT is technologically hard, or costs too much, and therefore they cannot start using it, then I hope they will take a look at the usefulness of the Global IoT Package.

Can a new business model be created even on the front-lines of manufacturing, such as at factories or plants?

Fujii: The Global IoT Package’s main targets are factories and plants, the front-lines of the manufacturing industry. How is IoT thought of at such locations?

Shimada: At Toshiba Digital Solutions, we provide an IoT remote monitoring cloud service called “Meister RemoteX™”. By using IoT to monitor the operational state of production equipment at factories or plants, this information can be visualized, making maintenance and other support work more efficient. However, there are still places that cannot make the leap to IoT for improvements like this alone.

Katayama: At SORACOM we also interact with many manufacturing companies, and there are many places that say they would like to use IoT and CPS for work improvements but that the improvements possible with currents products would not connect to further steps. Everyone seems to want to try something new, to collect data and convert it into value, but they don’t know from where to begin.

Shimada: In frank terms, they don’t know how to make it profitable. They don’t know how they can create enough profit to overcome the costs of getting started with IoT. For equipment manufacturers, if the result of using IoT to monitor equipment data is only that they were able to provide spare parts for repairs more efficiently and without waste, this would mean they make fewer sales. They have to switch to a new business model that will make profit somewhere different from where their current one does.


Fujii: But that does not mean that they can pass up the improvements offered by IoT, because their competitors will use them.

Shimada: Only working within their set boundaries, as they have done until now, will no longer be profitable, so they must re-define the scope of their jobs. For example, what I say when implementing IoT within my company is, “Don’t just sell hardware.” By which I mean, “Make a service, and sell hardware together with it.”


Fujii: So manufacturing companies must create some kind of service to provide value, beyond the scope of what they had decided was where their job ended. Are there any good examples?

Shimada: At a manufacturer of industrial water treatment equipment that adopted Meister RemoteX™, in addition to providing equipment to global water treatment facilities, they had also been providing remote monitoring to ensure that appropriate amounts of chemicals are applied to the water. However, with their existing technology, various issues and limitations had appeared for their sensing and monitoring capabilities, and this lead them to adopt our company’s service. By using the data they get through our service, they have been able to switch from a business of selling machines to one of providing those machines together with a monitoring service, in a kind of subscription format for water quality. Though a manufacturer, they have become able to make profit as a service provider.

Katayama: As far as creating value through a new service by using the data gained from IoT, that example is like the smart receipt example. I think this kind of thing will also become possible at the front-lines of the BtoB manufacturing industry.

Shimada: I call this Digital Evolution, or DE. Expanding the scope of work, changing the value chain, gathering knowledge; only once this is accomplished can a digital revolution, or digital transformation, occur. My argument is that DE comes before DX.